General: Spotted Knapweed is a biennial or short-lived perennial. It starts out as a rosette and can remain that way for several years before bolting and dying in a subsequent season.

Flowers: The flowers are light purple, aromatic, and found individually or in clusters on the stems. The bracts have black tips, giving the plant its spotted appearance.

Stems: The stems are upright and grow to around 1 – 1.5 m tall. First-year rosettes are comprised of deeply-lobed leaves on short stems, while mature plants have slender stems with many branches.

Leaves: The leaves are deeply lobed, greyish-green, hairy, and covered with translucent dots. Leaf arrangement is alternate. Rosette leaves are up to 20 cm long, while second-year leaves become progressively smaller with fewer lobes towards the top of the plant.

Roots: Spotted Knapweed has a taproot as well as lateral roots. 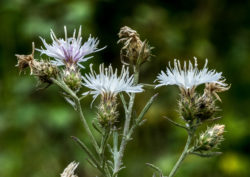 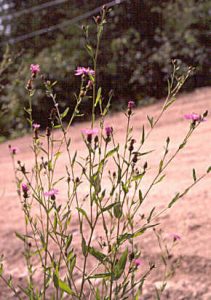 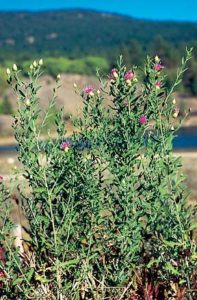 Photo credit: BC Ministry of Forests

Russian Knapweed (Centaurea repens or Acroptilon repens) has smaller flowers and no black marks on the bracts. 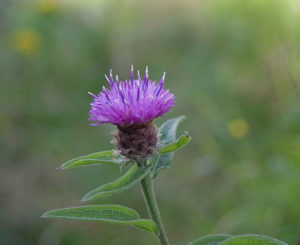 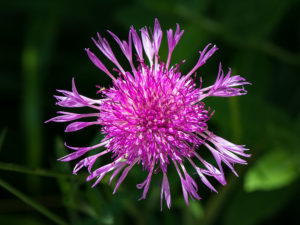 Please report any sighting of Spotted Knapweed by clicking here.

Spotted Knapweed originates from Eurasia. It was first introduced in North America in the late 1800s as a contaminant of alfalfa seed.

Spotted Knapweed likes open areas and well-drained soils. It is somewhat shade tolerant and prefers more moisture than other knapweeds. However, it is tolerant of a wide range of soil moisture levels. Spotted Knapweed is typically found in grasslands, open forests, along roadsides, on right-of-ways, and clear cuts. 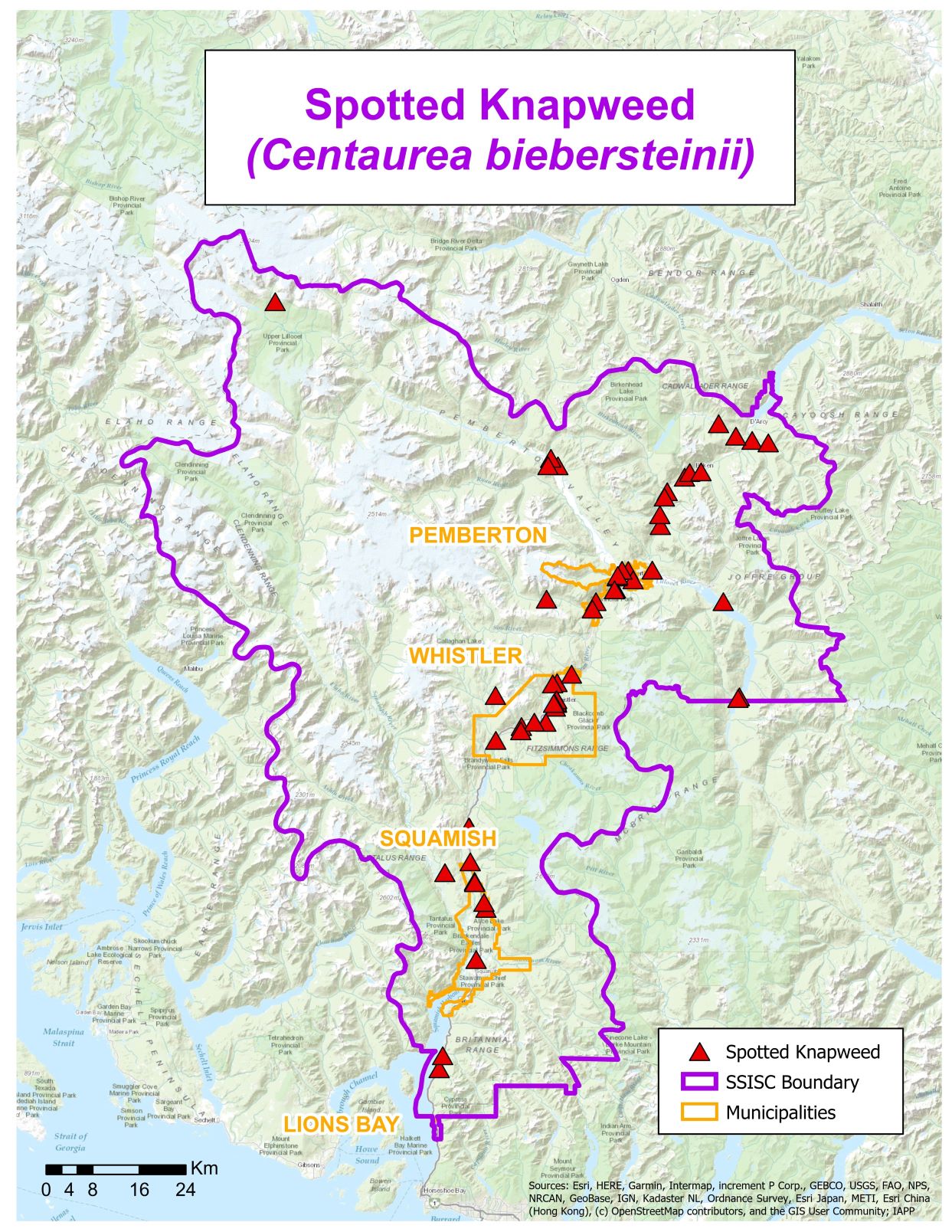 Spotted Knapweed reproduces by seed. One plant can produce up to 40,000 seeds in a season, and one square meter can contain up to 140,000 seeds. Seeds can remain viable in the soil for upwards of 8 years, so Spotted Knapweed infestations rapidly form a significant seed bank. Seeds are self-fertile, but can also be cross-pollinated by insects.

Spotted Knapweed seeds spread in the wind and in contaminated hay, gravel or soil; they can also spread by clinging to animals and the undercarriages of vehicles.

Spotted Knapweed is currently found throughout the Sea to Sky Corridor, so the best approach to controlling its spread is by CONTAINMENT.

What to do if you spot it: You can report any Spotted Knapweed sighting by clicking here.

Small infestations can be hand-pulled but will have to be repeated throughout the season and over many years. Every effort should be made to remove the taproot with little soil disturbance. If not possible, cut the taproot 5 – 10 cm below the soil surface. It is best to treat Spotted Knapweed before the plants set seed. Mowing doesn’t kill knapweeds; plants mowed at the rosette stage will quickly recover, and mowing after flowering will only further disperse the seeds.

Effective herbicides include picloram, dicamba, 2,4-D, clopyralid, aminopyralid, and glyphosate. Note that picloram, while effective, is not suitable for wet, coastal soils.

We recommend that any herbicide application is carried out by a person holding a valid BC Pesticide Applicator Certificate. Before selecting and applying herbicides, you must review and follow herbicide labels and application rates; municipal, regional, provincial and federal laws and regulations; species-specific treatment recommendations, and site-specific goals and objectives.

Twelve biocontrol agents have been released in BC for knapweeds. They are most effective when used in combination. Several agents show promise for a variety of habitats.

Grazing is not an effective eradication method; however having cattle, sheep, and goats graze Spotted Knapweed in early spring may help suppress flower and seed production.