Size: Adults can reach 29 cm in length, while hatchlings are around 2-3.5 cm long.

Colour: Hatchlings are green, with yellow and darker green markings on the head, legs, neck, and carapace (upper shell). Adults are distinguishable from other turtle species by the red “ear” patch behind the eye. Yellow stripes decorate the face and the neck, while the carapace is decorated with dark lines and swirls. The plastron (lower shell) of adult individuals is yellow with dark blotches.

Life Cycle: Individuals have a lifespan of 20-40 years, and reach sexual maturity between 3-4 years. 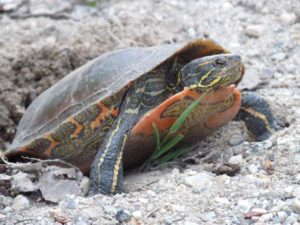 Red-Eared Sliders are native to the southeastern United States, Mexico, Central America and Brazil. They are an introduced species to Europe, Asia, and many other regions in North America, including the southern regions of British Columbia, Ontario, and Quebec. The global presence of Red-Eared Sliders can be attributed to both the pet trade and the commercial food trade in Asia.

This species prefers to make its home in freshwater ecosystems with slow currents and muddy bottoms, such as streams, rivers, swamps, ponds, and lakes. Hibernation occurs in mud or logs during the winter, while feeding and basking occur on rocks and logs in the summer.

Female Red-Eared Sliders lay 2-23 eggs in a cavity dug out of the soil during April or May, and can lay up to 5 clutches each year! Hatchlings typically emerge from the nest around June or July, but they may even emerge the following spring if temperatures are too low. 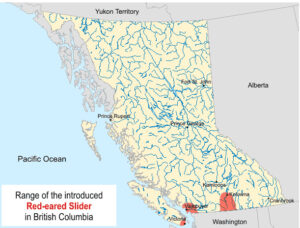 Red-Eared Slider Turtles are popular pets as hatchlings and juveniles. However, when they reach their full and often unexpected size, housing and care become difficult and pet owners discover that it is harder to care for a Red-Eared Slider than they might have originally thought. Pet owners often decide to release their unwanted Red-Eared Sliders into the nearest water body once they deem care too difficult.

The popularity of this turtle as a pet can be traced back to the cartoon Teenage Mutant Ninja Turtles, of which the main characters are Red-Eared Sliders.

Red-Eared Slider Turtles have been known to escape during transport, as well as from aquaculture farms that supply the commercial food trade in Asia. Once Red-Eared Sliders have been introduced to an area, females may disperse up to 2 km to lay eggs.

Red-Eared Slider Turtles have been spotted throughout the Lower Mainland, but their presence has only been reported in a few locations in the Sea to Sky Region, so PREVENTION of further spread is key.

Learn to identify Red-Eared Slider Turtles: use the images presented in this profile page.

What to do if you spot it: You can report any Red-Eared Slider Turtle sighting by clicking here.

Don’t Let It Loose. Through public education and awareness, encourage pet owners to consider re-homing services and rescue centers for unwanted Red-Eared Sliders or euthanasia as a last resort. Re-homing services in the Sea to Sky include:

Ensure information about proper care available. Pet shops or retailers should provide proper care sheets for Red-Eared Sliders, and ensure that any potential pet owners know the size and lifespan of the species.