Flowers: Are bright yellow and snapdragon-like, with an orange throat.

Stem: Are narrow and upright, originating from a stocky, woody base that can grow up to 1 m.

Leaves: Are alternate, and clasping on the stem. Dalmatian Toadflax leaves are heart-shaped, waxy and light green with a bluish cast.

Roots: Dalmatian Toadflax has rhizomes. The root system is perennial and spreading. 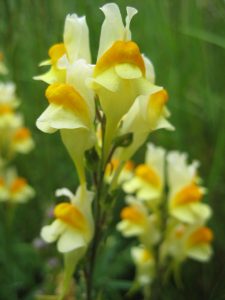 Yellow or Common Toadflax (Linaria vulgaris): This plant is of the same genus, and has similar yellow flowers. Dalmatian Toadflax leaves are clasping, shorter and more broad-based than Yellow Toadflax. Yellow Toadflax is also shorter (up to 60 cm tall).

Origin: Dalmatian Toadflax is native to Western Asia as well as the Mediterranean region; it was introduced to North America in the late 19th century as a garden ornamental.

Habitat: Dalmatian Toadflax is most commonly found on sandy or gravely soil on roadsides, railroads, pastures, cultivated fields, rangelands and clear cuts. It is adapted to a wide variety of conditions: it thrives in poor, dry soils, but can also cause issues in high-quality soils. Dalmatian Toadflax does well in sunny to partly shaded conditions.

Dalmatian Toadflax is often associated with several other invasive species. For example, it appears to be spreading as Diffuse and Spotted Knapweed are controlled. Similarly, Dalmatian Toadflax has been observed on rangeland sites after biological control suppressed St. John’s Wort. 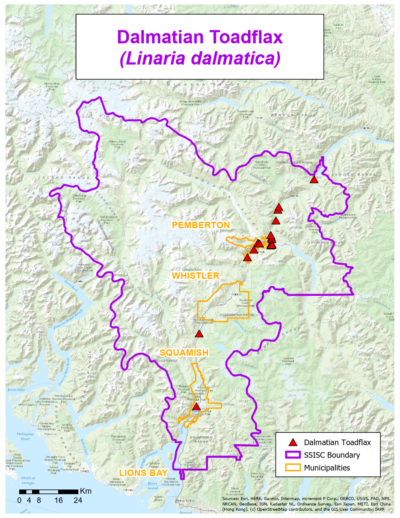 Dalmatian Toadflax reproduces by seed and vegetatively. One mature plant can produce up to 500,000 seeds each year, and seeds remain viable in the soil for up to 10 years.

It also reproduces vegetatively via creeping rhizomes, and from root fragments.

Dalmatian Toadflax seeds are extremely small so they can spread by the wind. Dried flower stalks and seeds can remain on the plant for up to 2 years, and the stalks easily break off and spread in the landscape. Seeds also mix with soil and can be transported in clothing, equipment or vehicles. Root fragments can create new plants, so improper plant disposal could also help spread Dalmatian Toadflax.

Dalmatian Toadflax is found in communities the Sea to Sky Region, so PREVENTION of further spread is key.

Learn to identify Dalmatian Toadflax: use the images presented in this profile page to learn how to identify this plant.

What to do if you spot it: You can report any sighting by clicking here.

Please report any sighting of Dalmatian Toadflax by clicking here.